In August of 2016 CU Boulder Housing and Dining Services was tasked with creating a new site for it’s 30,000 students to use for everything from learning about residence halls, seeing dining hall offerings, information on CU’s many green initiatives and much more. 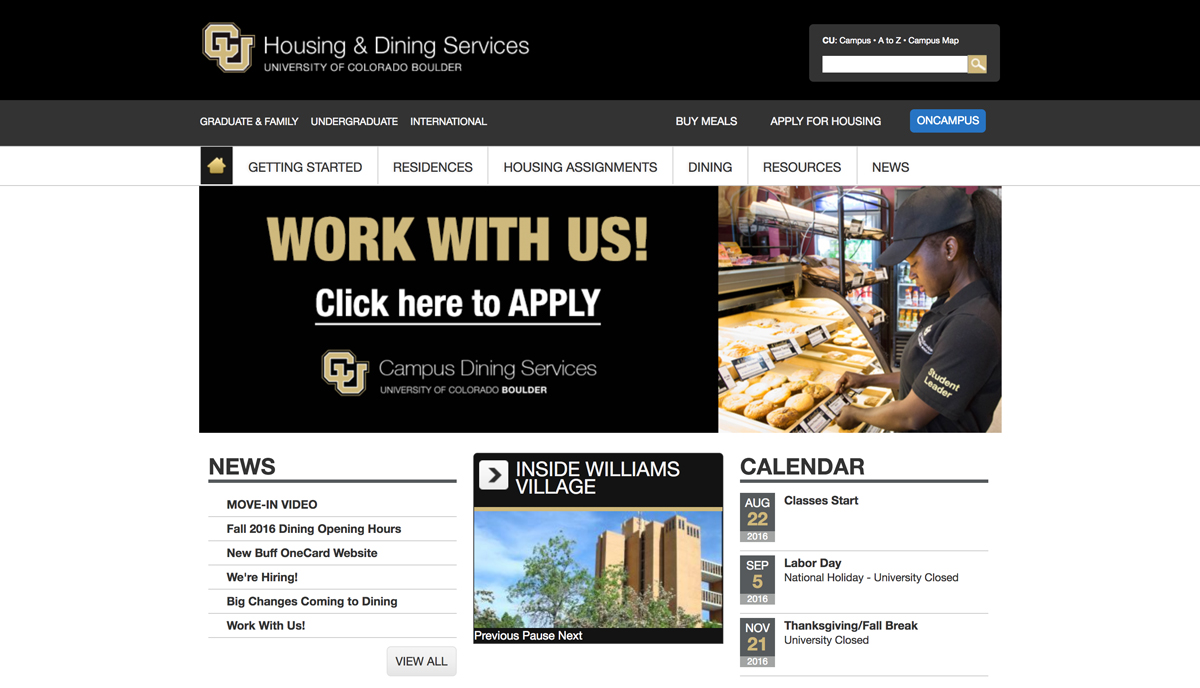 Initially the vast majority of my work revolved around styling pages for mobile devices, addressing a11y issues, and developing designs from the UX designer. After the site was rolled out my focus shifted to a full on site repair role. Fortunately we did not have many issues after rolling out the site, however the styling related ones were all dealt to me.

After the site had been live for a couple months and the bugs we had at launch had all been squashed I switched to a role that was held UX and half Development. At this point our full time UX Developer had left and I stepped up to work out new page designs for our other projects. The majority of this work focused on the refinement of a student facing portal for residence hall related services.

When I was not designing new pages I was being tasked with refining styles of our current pages. One instance of this which was a print version of an online parking permit that was required by all 8,036 freshman coming to live on campus. The biggest challenge with a design like this was ensuring that it would print with good contrast ratios and in the proper format on all devices. I rigorously tested this design across all operating systems, browsers and eras of technology to ensure literally everyone and their grandma could print a permit.

For me the best bit of experience I got with my time at CU HDS was working with an enterprise level CMS like Drupal within a huge organization like CU. As the only web team in the massive department that is CU Boulder Housing and Services we had many stakeholders to appease on every project. Being able to make the mental switch from one project to another while keeping in mind the requirements of each stakeholder was a challenge I had never experienced but by doing so I am now much better at juggling several projects at once.

The other skill I developed in my time at CU HDS was the ability to work CSS magic within a CMS that offered us very little latitude design wise. Unlike traditional HTML, CSS, JS development working with a CMS like Drupal can be very limiting. One will often find themselves stuck with a design that is almost too out of the box for the restrictive HTML output from Drupal. It is at this point that making the best use of CSS becomes a necessity. I was consistently pushing the boundaries of what is possible to do with css to achieve the look and feel we wanted out of a site.

note, the site linked below is the version of the website as it was when I left (thanks wayback machine), the website has since been redone